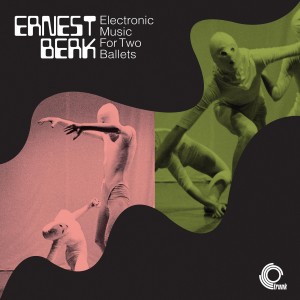 Extraordinary unreleased homemade electronics from the late 1960s made by a pioneering ballet dancer and musician. With possibly the best name ever.

There are very few Ernest Berk recordings. As a pioneering ballet dancer, instructor and electronic music artist he was surprisingly prolific. He made music for all sorts of uses – he even made library music – and of course this very album of his music for two of his ballets.

Towards the end of his life Ernest Berk gifted his entire collection of works, tapes, documents and all to the Historical Archive Of The City Of Cologne. Tragically, in 2009, a large part of the archive collapsed (due to the construction of an underground railway) destroying 90% of the everything. Berk’s tapes have tragically never been recovered. They are assumed lost forever.

So these two recording – issued privately circa 1970 – remain precious to say the least. There were no masters, this new pressing was simply transferred from the original copy held by his family. We have done our best to restore the sound. I have also reproduced the original notes, and from what I can gather this album may well have been pressed and given away as promotion for the Dance Theatre Commune.

Ernest Berk was born in Cologne, Germany and cams to England just before the war. He started a dance company in London and wanted a sound especially suited to his experimental dance style. This he found in electronic music.

Berk feels that electronic music is able to express the feelings of contemporary society in a more potent and communicative way than conventional forms of music. This is not to say he disregards traditional forms of music, rather, he blends the best elements of both, creating a new and exciting sound.

Over the years he has gained an international reputation as a composer of electronic music. His works have been heard in Berlin, Cologne, Florence, Edinburgh, United States, to name a few. He has scored a number of films, plays and ballets. Ernest and his wife, Ailsa, opened a new studio at 52 Dorset St, W1, in April, 1970 where they give tuition in modern dance, electronic music and percussion. They also teach at the Guildhall School Of Music And Drama and at ILEA Institute (Stanhope). The studio is headquarters of the Dance Theatre Commune which the Berks created in order to combine their work in dance and music with those already working in similar spheres.

SIDE ONE
INITIATION
A Ballet Score: The Theme Of The Ballet Is Modern Youth And Its Ritualistsic Behavior. One Has To Be “initiated” In Order To Belong. The Subtitles Of The Eleven Scenes May Give A Helpful Guideline:
1) Arrival And Setting Of The Scene
2) The Girls Alone, Giggly And Immature
3) The Scare
4) Passionate Whip
5) Undercurrents
6) Tittilation
7) Phallic Symbol
8) Song Of The Adulated Star
9) Adoration Madness
10) The Body
11) The Sacrifice And Final Initiation

SIDE TWO
GEMINI
A Ballet Score: Identical Twins Are So Much Out Of One Mould That They Experience Transference Of Sense, Perception And Emotion. A Young Man Meets One Of The Girls And Falls In Love, Unaware Of The Twin Sister. The Great Love Duet Show The Young Man Dancing With One And Sometime The Other Without Knowing There Are Two. Later, He Surprises Them Together And Finds Himself In Love With Both. So They All Live Together In Great Bliss And Fun Until The Day Comes When One Of The Sisters Dies. Her Surviving Sister Feels Like The Dead. The Young Man Cannot Lopve One Without The Other. They Part Inconsolably

Freddie CrugerJust Chillin' In The Spot