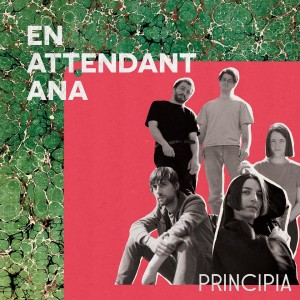 Parisian quintet En Attendant Ana have dazzled since day one. From the muted strains of their 2016 EP “Songs From The Cave”, to the assured 2018 TiM debut “Lost & Found”, to the sparkling refrains of “Juillet”; released just before the world collapsed around us, and which stood as the band’s rebirth and purest statement of their music ambitions - until now. “Principia” is the band’s third album and is without a doubt their best yet.

Bandleader & principal songwriter Margaux Bouchaudon’s voice anchors many of the songs on “Principia”, her crystalline delivery ringing out like a bell as the band swoons & sways beneath her. The songs on “Principia” were composed from a place of confusion about the state of the world and her place in it, looking outward and inward for answers. They question our perception of others, the one they have of us and finally the one we have of ourselves in a society where the individual is king and the group is forgotten.

Guitarist Max Tomasso - newly joined just before the recording of “Juillet”- feels more “moved-in” on these tunes, his sly guitar-work gliding effortlessly through. No showboating - only prickling at the precise moment necessary in suit of the song itself. New member Vincent Hivert (their touring sound man, Hivert joined the group just as touring was underway for “Juillet”, replacing founding member Antoine Vaugelade)’s bass-work is rubbery & flexible, bouncing around and thru the melodies on a rhythmic sugar-high, practically urging on drummer Adrien Pollin’s metronomic swing.

The band’s secret weapon, multi-instrumentalist Camille Frechou’s trumpet & saxophone are more present & considered in the arrangements, adding a new layer of sophistication to the group’s already debonair indie pop. Her beatific harmonies add a yearning to Bouchaudon’s lilting phrases; sometimes uplifting, other times melancholic. Bouchaudon says “One of the most important points we tried to focus on was the place given to each instrument. For the first time, we withdrew parts, we were careful not to play everyone at once and I think that the result is a much lighter album in which every musician has a specific place and moment”.

But this album is also the first one to have been shaped entirely by the band, from the conception to the production. The meeting of Vincent Hivert and Margaux Bouchaudon gave birth to a duet in which the technical and artistic aspects were intertwined from the very beginning of the conception of “Principia”. Apart from reshaping En Attendant Ana’s dynamic, Vincent Hivert was able to think as a musician and producer as soon as they started working on Margaux Bouchaudon’s demos which brought a new dimension to their music. The two of them recorded and mixed the album together reuniting their references and artistic goals.

“Principia” is a great step forward without sacrificing the things that make the band unique. The nods to French pop (both current & classic) still permeate the proceedings, and the group’s penchant for Anglo-Saxon indie pop from The Nineties (think Electrelane, Stereolab, American Analog Set) still rings out, but there’s an air of - dare we say - maturity in “Principia”s twelve songs. The group always felt a little ‘out-of’ and ‘ahead-of’ its time, but tunes like “Wonder” “The Cutoff” and “Same Old Story” are cinematic and romantic, and absolutely feel like the next great phase of an already great band."