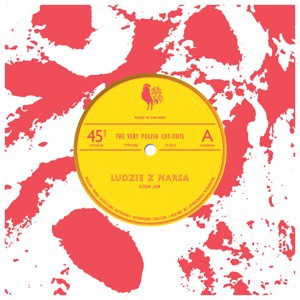 Brand new (and also the last one) treat in the The Very Polish Cut-Outs 7" series, usually devoted to quirkier and weirder tracks than the much acclaimed 12" samplers.

Eltron John kicks off the A-side with a reggae influenced rework of a Polish children's song from late 80s called 'Ludzie z Marsa'.

His modern, dubby production and close attention to the smallest details fuses perfectly with abstract lyrics. This serious-not-serious song treats about people who are from Mars and invade Earth, because 'they can't remember what the forest animals look like, what a farce!

Already road tested by the members of TVPC, this Caribbean-East European depth of a groove works perfectly in late night drunk sets.
On the B-side Eddie C visits executive suite of a cruise ship with his extended, melancholic rework of 'Stoneczna Promenada'. The original tune is an old Polish cocktail-lounge classic from the late 70s, transformed here into a psychedelic story of epic proportions. Moody loops evoke instant headnodding and added dub effects magnify the nostalgic, sunny vibe.