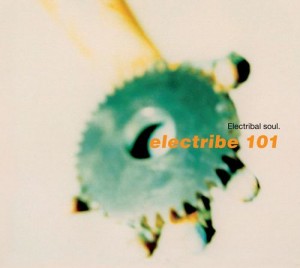 Electribal Memories had yielded the hits ‘Talking With Myself’ and ‘Tell Me When The Fever Ended’ and pushed Electribe 101 to the forefront of a crossover electronic scene that fused dance music with pop savvy. They were snapped up by Phonogram, managed by Tom Watkins and hailed as “the next band to meet the Queen” by i-D. The band took the coveted support slot for Depeche Mode on their epochal World Violation tour and supported Erasure at Milton Keynes Bowl. Seen as the next big thing, everything pointed toward enduring critical success for Electribe 101, and the band settled into putting their second album together.

“There was a degree of confidence among us when we came to write the second album,” recalls Billie Ray Martin. “To me, the songs we put down sound like some of our finest moments.” More immediately lush and warm than the dancefloor-friendly structures of Electribal Memories, the clue to the sound of Electribal Soul lies in the second word in its title: soul. Songs like the aching sensuality of opening track ‘Insatiable Love’ or the emboldened defiance of ‘Moving Downtown’ showcase Billie Ray Martin’s distinctive vocal range as it moves from haunting quiet to dramatic, euphoric rapture. Lyrics from ‘Moving Downtown’ had found their way into ‘Pimps, Pushers, Prostitutes’ by S’Express, and the song would appear as ‘Running Around Town’ on Martin’s 1996 solo album. The strikingproduction on the version of the song presented on Electribal Soul suggests classic late sixties soul influences, such as those of legendary Motown producer Norman Whitfield, with the long shadow cast by Kraftwerk never being far away.

‘Deadline For My Memories’, the song that provided the title for Martin’s first solo album, was originally intended for the second Electribe 101 album. Its lyrics document a sense of freedom and liberation from the darkness of a bad relationship, accompanied by jazzy piano and organ sounds over a quiet rhythm and discrete electronics. In contrast, ‘A Sigh Won’t Do’ finds Martin in soothing vocal mode, despite its devastating message about the final ending of a strained relationship, her lyrics framed by restrained and subtle beats and sounds.

To spend time with Martin’s voice on Electribal Soul is to find yourself moved deep into the ordinarily impenetrable emotional corners of your own psyche. “I was into big ballads at the time and listening to all kinds of US and UK singers, and I was also young enough to want to prove myself as a belter of ballads,” explains Martin of the classic soul edge the album showcased.
Electribal Soul heads into darker territory with ‘Hands Up And Amen’. Originally written by Martin in Berlin in the period before moving to London and forming Electribe 101, the song was then perfected and enhanced by the band’s production nous. ‘Hands Up And Amen’ savagely documents the mugging of a woman in Queens, NY at gunpoint, only to resolve itself with a middle section that nods reverently toward gospel tradition. The song coalesces around a regimented break and burbling synths, finally ending with layers of urgent synth sounds.

Meanwhile, a cover of Throbbing Gristle’s ‘Persuasion’ takes us into a seedy world of sexual coercion and creepy infatuation, predating Martin’s chilling version of the track with progressive house unit Spooky two years later. Supported by a minimal, nagging rhythm and barely-fluctuating sounds, Electribe 101’s take on ‘Persuasion’ makes for uneasy listening, even though Martin manages to inject a sort of twisted sympathy for the protagonist as the song progresses.

That Electribe 101 were as comfortable offering complicated, nuanced tracks like ‘Persuasion’ alongside pop house bangers like ‘Space Oasis’ – written by Billie Ray Martin with Martin King before Electribe 101 was formed – is testament to the way the band wove their way effortlessly through electronic music reference points. Framed by light, jazzy piano melodies and string sounds, the energy of ‘Space Oasis’ soars so high that it could easily reach the moon, while highlighting how well-suited Martin’s voice has always been to club music. We hear the same reminder of her dance music credentials on ‘True Memories Of My World’, finding her describing a Hollywood actress who reflects on being used by directors to sell her ‘tears’.

Hooking up with the Birmingham-based Nordhoff, Stevens, Fleming and Cimarosti after placing a Melody Maker ad in 1988 (“Soul rebel seeks musicians – genius only”), it was clear that Martin had found a group that recognised the unique power and importance of her voice. Having worked with genres as diverse as reggae, rock and R&B, the four producers proved to be perfect collaborators, presenting carefully-sculpted backdrops that emphasised the towering emotional dexterity of her voice.

“Listening back to these tracks now, I was reminded of what a bunch of great musicians they were,” says Martin. “They had a rule that if a part still sounded good after a day or two then it could stay. If it bothered the vocals, it would go.” Even more so than on Electribal Memories, Electribal Soul places Martin at the captivating centre of these pieces, surrounding her voice with everything from dubby rhythms to chunky R&B beats to nascent trip hop breaks; wiry, acid-hued synths uncoil gently without ever dominating, while horn samples and lush, disco-inflected strings provide a rich, naturalistic accompaniment for Martin’s emotional outpourings.

The band finished mixing the album at London’s Olympic Studios in 1991. They were assisted by Apollo 440’s Howard Gray on production duties for ‘Deadline For My Memories’, ‘Insatiable Love’ and ‘Space Oasis’, with Gray supported by talented engineer Al Stone. Pre-release promo tapes were issued and an enthusiastic energy started to build around the band’s anticipated second album.

It was not meant to be. Against a backdrop of a worsening relationship with Tom Watkins, and a disinterested Phonogram, instead of receiving a positive reaction to the new tracks, Electribe 101 were swiftly dropped by their label. Electribal Soul languished, unreleased, and the band yielded to pressures that had been building and split up. After collaborating with Spooky and The Grid, Billie Ray Martin went on to release her seminal debut solo album in 1996, with it securing the era-defining hit ‘Your Loving Arms’, while the other group members continued to work together as The Groove Corporation.
Thirty years after the songs were recorded, we’re now finally able to hear what the second and final chapter of Electribe 101’s story sounded like. Electribal Soul shows that the band had really only just got started when they dropped their first album in 1990. Heard only by a select and privileged few, what followed elevated the band’s music to a completely new level, making Electribal Soul musical buried treasure of the most precious and rare variety.