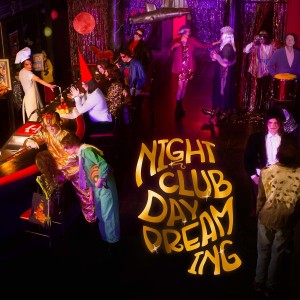 After turning heads with the densely orchestrated Riddles, produced by Dan Deacon, the Baltimore-based duo Ed Schrader’s Music Beat have given us another giant leap forward with their fourth record Nightclub Daydreaming. The whiplash-inducing stylistic shifts between aggressive noise rock and operatic gloom pop that have become the band’s trademark have given way to a single aesthetic that fuses both impulses. On Nightclub Daydreaming, menace teems just below the surface as propulsive, stark arrangements leave space that Schrader fills with strident, reverb-soaked narration.

When Ed Schrader and Devlin Rice began writing the record in 2019, the idea was to make a fun, danceable album, but an underlying moodiness proved unshakeable. As Schrader puts it, “The cave followed us into the discotheque.”

The duo road-tested the songs “This Thirst,” “Echo Base” and “Black Pearl” with drummer Kevin O’Meara on tour with Dan Deacon in February 2020. COVID restrictions cut the tour short, squashed plans to go immediately into the studio and sent the touring party on a sprint from LA to Baltimore. “We broke down outside Roswell,” Schrader recalls. “And these cops laughed at our dumb asses as we used all our pent-up stress and fear to propel our half-submerged bus out of the muck, yelling epithets to the sky.”

It was one of the last experiences they had with O’Meara, whose death in October 2020 weighed heavily on Rice and Schrader’s minds as they worked on the record. It was also a cathartic moment that presaged the aesthetic that would permeate the songs on Nightclub Daydreaming: “mad euphoria in the face of doom,” as Schrader puts it.

“This Thirst” is an alienation-fueled barn burner barely restraining itself through musically sparse, lyrically dense verses to culminate in a howling, synth-saturated chorus that beats horror punk at its own game. “Came from the north with a twisted planetarium, rock salt, nervous tic and novocaine,” Schrader sings, assuming the guise of a vagrant whose irresistible urges lead him through a fever dream of chemicals, back-alley bartering and existential threats.

The hyperactive “Echo Base” exudes agitated-cool, with breakneck drum fills and a relentless bass line. The narrator is stranded in a frozen landscape and running out of options. “She is just a night train away,” we are assured, and yet we sense that may not be an altogether good thing.

The band recorded and mixed Nightclub Daydreaming over a two-week period with Craig Bowen at Tempo House in Baltimore with David Jacober on drums, turning demos with artificial sounds and placeholder melodies into fully realized songs playable by a live band. The end result is not the album of “sunny disco bangers” that Rice says the band set out for, but something deeper, darker and more rewarding.