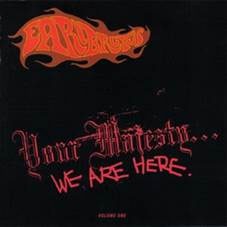 Earl Brutus formed in 1993 and release a handful of singles before their debut album Your Majesty… We Are Here on Deceptive Records in 1996. They are chaotic, glam-rock, glitter-stomp British Pop. They think Bowie, T-Rex, Kraftwerk and The Fall. Their chaotic live shows became folklore and their reviews and interviews were always impressive. Your Majesty… featured in Q Magazine’s Top 50 Albums of the Year in 1996 and in 1000 Albums To Hear Before You Die.

Your Majesty… has been long unavailable and is now re-issued.

The two CD edition also includes all the b-sides sequenced by the band and an unreleased David Arnold remix of Life’s Too Long, the rare Alan Vega (Suicide) version of On Me Not In Me and Earl Brutus Display Purchasing Power, both commercially available for the first time.