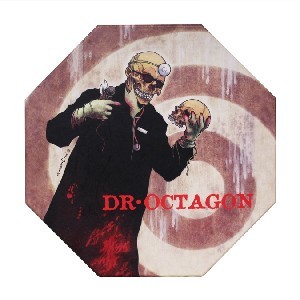 Dan The Automator’s and Kool Keith’s famed collaboration from the mid-‘90s is celebrated with a 28-track set housed in a custom, octagonal box, with 5 unreleased songs (originals + remixes); original Pushead cover artwork; and 40 page liner notes booklet. By the mid-1990s, the rap game had been through a lot in its two decades of existence: Early-days scraping to get by and be heard; The advent of sampling; The rise of groups ranging from Run-DMC to the Wu-Tang Clan and the sprawl of Dr. Dre’s shadow from the West across the globe; and solo juggernauts ranging from MC Hammer to the Notorious B.I.G. Thankfully, though, with everything that the genre had been through, there was still a lot of room to grow. And in early 1996, a new indie duo appeared that won over a whole new international audience, from hard rocks to skate punks. That pair was Dr. Octagon: Dan “The Automator” Nakamura and Kool Keith [Thornton]. In some ways, the Dr. Octagon album is a solo release.

But Keith wasn’t the only hand on deck. He brought along a young, New York-based MC with him: Sir Menelik. Menelik was featured on four album tracks, starting with “Dr. Octagon,” and proved to be an excellent super-scientifical, fast-rhyming foil to Keith. And there was one final featured contributor who helped add to the album’s next-level sound: San Francisco’s DJ Q*Bert, who cuts on half of the album’s songs. The album originally came out on The Automator’s Bulk Recordings label in early 1996, with cover art by metal and punk cult hero visual artist Pushead. Pressing numbers weren’t huge, but as the year went on, the buzz grew, and a slightly expanded version of the album was released on James Lavelle’s London-based Mo Wax label.

Then Dan took an offer from newly-formed major label DreamWorks, to re-release the album with extra tracks in mid-1997. The new domestic pressing allowed for a bigger press push, as well as the group’s first and only video, for “Blue Flowers.” Beyond “Blue Flowers,” the album is chock-full of mind-bending tracks, like “Earth People”; the wacked-out but sincere love ballad “Girl Let Me Touch You”; the metal-tinged “I’m Destructive”; Q-Bert’s turntable workout “Bear Witness”; and, of course, freaky Keith skits like “Elective Surgery” and “General Hospital”. Dr. Octagonecologyst is one of the most unique rap records the genre has ever seen, and this is the perfect way to celebrate it – whether it’s the first time you have heard this mind-expanding record, or the three thousandth.