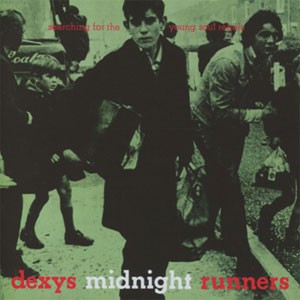 Searching for the Young Soul Rebels is the debut studio album by Dexys Midnight Runners, released on July 11, 1980. Led by Kevin Rowland, the group formed in 1978 in Birmingham, England, and formed a strong live reputation before recording their first material. Recorded during April 1980, the album combines the aggressiveness of punk rock with soul music, particularly influenced by the Northern soul movement.

The album was preceded by and contains the hit-single "Geno", which topped the UK Singles Chart. It also contains two other charting singles: "Dance Stance" (re-recorded as "Burn It Down") and "There, There, My Dear". The album reached number 6 on the UK Albums Chart and is certified Silver by the British Phonographic Industry.

Laura says: An absolute classic! One of my favourite records of all time. Post-punk attitude and Northern soul stomp - what's not to like?