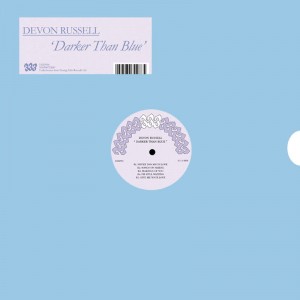 Death Is Not The End launch sub-label 333 with a first-time vinyl reissue for the late Devon Russell's Darker Than Blue LP - put together as a tribute to the great Curtis Mayfield. First issued in 1993 but featuring material originally recorded as far back as 1979, the collection includes a cast of prominent players across it's 10 tracks - featuring musical contributions from Sly Dunbar, Aston "Family Man" Barrett, Earl "Wire" Lindo, Dean Fraser, Bobby Ellis, Leroy "Horsemouth" Wallace, Prince Lincoln Thompson and many others - plus production & arrangment from Earl "Chinna" Smith, Sly Dunbar & King Tubby's Firehouse Crew alongside Russell himself. Limited to 333 copies.

"The concept for Darker Than Blue dates back to 1979. Returning from South Amerrica with my partner (in duo Lloyd & Devon) Lloyd Robinson, we did "Red Bum Ball" which had been a massive hit in the 60's. It was around this time that Earl Chinna Smith (of The Wailers and Soul Syndicate fame) approached me with the idea of re-making some Curtis Mayfield songs. "Darker Than Blue" was the first track we did, followed by "Move On Up" in 1981, both of which received great reviews.

On returning to Jamaica from a UK tour in 1986, my good friend King Tubby had taken on five men from my school of music, from which the Firehouse Crew were born. Within 3 years they had matured to become Jamaica's No.1 instrumental band, winning the Rockers award. Then in the spring of 1990, together we managed to record the album "Money, Sex & Violence", during a tour of the UK & France, on which we did Mayfield's "Give Me Your Love". The track was played to Steve Barrow who suggested we do more Curtis tracks.

Sly Dunbar and I have known each other for as long as I can remember. We grew up in the same hood and used to jam regularly in our youth. I told Sly about the further Mayfield tracks I wanted to do and he agreed that it would be a good idea. So Sly, myself and The Firehouse Crew went to work at the Leggo Studios in Kingston, Jamaica and created the remaining tracks for the Darker Than Blue LP, a tribute to Curtis Mayfield.

We grew up on the sounds of Curtis Mayfield and The Impressions. Everyone in Jamaica loved them. His death was a terrible thing, but while there is life, there is hope."
- Devon Russell, 1994.