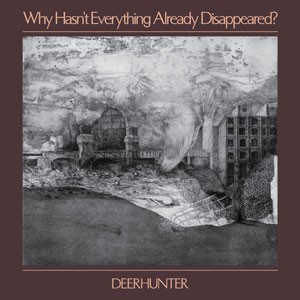 As thrilling and unpredictable as anything in Deerhunter’s near 15-year career, Why Hasn’t Everything Already Disappeared? was recorded in several strategic geographic points across North America, and produced by the band, Cate LeBon, Ben H. Allen III, and Ben Etter. Forgetting the questions and making up unrelated answers, Deerhunter’s eighth LP is a science fiction album about the present. Exhausted with the toxic concept of nostalgia, they reinvent their approach to microphones, the drum kit, the harpsichord, the electromechanical and synthetic sounds of keyboards. Whatever guitars are left are pure chrome, plugged straight into the mixing desk with no amplifier or vintage warmth.

Javi says: Is it a guitar? Is it a synth? Is it some old-time harpsichord-y thing plugged through a sh*t-ton of reverb? Your guess is as good as mine. The only thing for sure is that indie darlings Deerhunter have created their most consistent and nuanced album since 2010’s ‘Halcyon Digest’ in their seventh LP, ‘Why Hasn’t Everything Already Disappeared?’.
With fellow Top 20 maverick Cate Le Bon at the production helm, there’s nothing the band can’t do—whimsical groove-laced indie and atmospheric expansiveness are married perfectly on songs like the opener “What Happens to People?” and penultimate bop “Plains”, and just as the voice of God bids us good morning on “Detournement”, guitarist Lockett Pundt’s sole offering “Tarnung” is already preparing to tuck us into bed.
Every song is a stutter-funk gem, a space-age exploration of pastoral life, a strutting jaunt into the end of days. Every song is a grower, and boy, how big they grow…