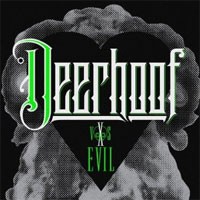 "Deerhoof vs Evil" documents the bands' 'coming-of-age'. The result is polished, blissfully exuberant, and huge sounding. Going DIY meant freedom to reinvent themselves, playing each others' instruments, altering those instruments so drastically as to be unrecognizable, (those aren't Joanna Newsom or Konono No. 1 samples, those are John and Ed's guitars), and generally splashing their sonic colors into the most unexpected combinations.

To document their musical 'coming-of-age' the band members could only trust themselves. Besides their cover of an obscure Greek film soundtrack instrumental ("Let's Dance the Jet"), and a song done for NY artist Adam Pendleton's documentary film installation BAND ("I Did Crimes for You"), these songs were completely self-recorded, mixed and mastered in practice spaces and basements with no engineers or outside input.