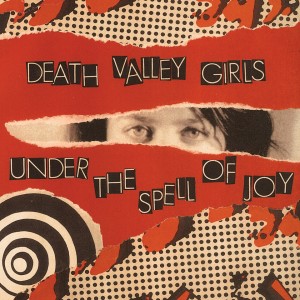 The album opens with “Hypnagogia,” an ode to the space between sleep and wakefulness where we are open to other realms of consciousness. The song slowly builds along a steady pulse provided by bassist Pickle (Nicole Smith) and drummer Rikki Styxx. Tripped out saxophone bleats from guest player Gabe Flores swirl on top of the organ drones laid out by guest keyboardist Gregg Foreman. The band’s choral objectives for Under the Spell of Joy are established right off the bat, with Bonnie Bloomgarden’s melodic invocations bolstered by a choir, giving the album a rich and vibrant wall-of-sound aesthetic. The song ominously builds on its hypnotic foundation until it opens up into a raucous revelry at the four-minute mark.

The portentous simmer of the opening track yields to the ecstatic rocker “Hold My Hand,” where verses reminiscent of Velvet Underground’s “I’m Waiting For The Man” explode into big triumphant choruses. From there the band launches into the title track, which marries the griminess of The Stooges with an innocence provided by a children’s choir chanting the album’s primary mantra “under the spell of joy / under the spell of love.”

Death Valley Girls have always vacillated between lightness and darkness, and on “Bliss Out” they demonstrate their current exuberant focus with a patina-hued pop song driven by an irrepressibly buoyant organ line laid down by keyboardist The Kid (Laura Kelsey). A similar cosmic euphoria is obtained on “The Universe,” where alternating chords on the organ help elevate soaring saxophone and keyboard lines out beyond the stratosphere. If you’re looking for transcendental rock music, look no further.

“Death Valley Girls are a gift to the world.” Iggy Pop.

“If Charlie Spahn Ranch girls had formed a band that was part-Stooges, part-Bikini Kill, all groove, then they’d have sounded like this.” Classic Rock Magazine.

“A striking record, all brazen fury and bratty beats, something resembling hard rock before Sabbath” Noisey.

Death Valley GirlsIslands In The Sky