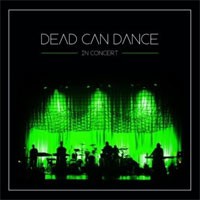 Dead Can Dance release ‘In Concert’, a document of their tour for the ‘Anastasis’ album, released through [PIAS] Recordings.

Originally released last August, ‘Anastasis’ is Dead Can Dance’s first album since 1996’s ‘Spiritchaser’, and has sold over 150,000 copies worldwide.

“I would say without hesitation that this has been the most rewarding tour that we have ever undertaken,” notes Brendan Perry. “On one level it has been an absolute pleasure to perform in such beautiful locations with such a wonderful band and crew, but also to be able to connect on a personal level with the many devoted admirers of our art both old and new. It would seem in our case absence has certainly made the heart grow fonder and it has been an absolute joy to be given the opportunity to be able to share our music in the ultimate setting of the living work.”