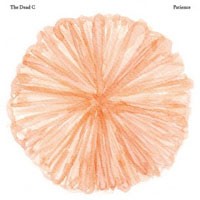 "Patience" is both appropriate and inappropriate as a title for the latest release by The Dead C—inappropriate because it’s been only two years since the last album, which in Dead C Time is but the flicker of a candle; appropriate since the key to enjoying their sounds is willingness to sit down, listen and let the music take over your mind. These four unforgiving and intense tracks will not be confused with the work of any other band. Recorded in Dunedin over the Southern summer of 2009/10, "Patience" captures a restless band that never settles into any form.

The trio of Michael Morley, Bruce Russell and Robbie Yeats makes their improvised music sound like the most substantial ever recorded, no matter in what direction they go. Here, vocal-less, thick and thundering electric drones compound and retreat like a Pacific Ocean of noise. Morley once again provides the artwork and continues in his color palette of late. Its circular, flowery texture provides the perfect mandala for contemplation while lost within the deep meditations that "Patience" inspires.

Darryl says: Nobody else does improvised avant-rock as well as the Dead C, psychedelic drone fuelled mantras of the highest order.