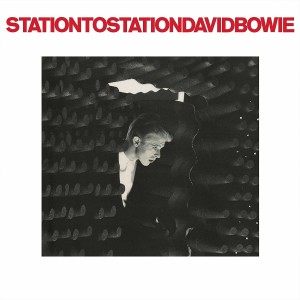 "Taking the detached plastic soul of Young Americans to an elegant, robotic extreme, Station to Station is a transitional album that creates its own distinctive style. Abandoning any pretense of being a soulman, yet keeping rhythmic elements of soul, David Bowie positions himself as a cold, clinical crooner and explores a variety of styles. Everything from epic ballads and disco to synthesized avant pop is present on Station to Station, but what ties it together is Bowie's cocaine-induced paranoia and detached musical persona. At its heart, Station to Station is an avant-garde art-rock album, most explicitly on "TVC 15" and the epic sprawl of the title track, but also on the cool crooning of "Wild Is the Wind" and "Word on a Wing," as well as the disco stylings of "Golden Years." It's not an easy album to warm to, but its epic structure and clinical sound were an impressive, individualistic achievement, as well as a style that would prove enormously influential on post-punk" - Allmusic.