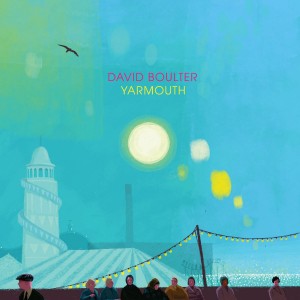 David Boulter is a founding member of Tindersticks, he has made over 20 studio albums and film soundtracks with the band. Nottingham born, but based in Prague since 1998, under his own name he has worked on music for many films. These include an eight-part serial Pustina/Wasteland for HBO Europe, the American movie Five Nights In Maine and recently two documentaries with Turkish/Belgian director Volkan Uce. Yarmouth is his first solo LP.

The inspiration for Yarmouth came when David, arrived a day early for a show at the Arts Centre in Norwich, and made an impromptu visit by train to the seaside town where had spent his childhood holidays.

In a year when most of us have been unable to travel, Yarmouth offers an escape to summers past. It recalls the saturated colours of a John Hinde postcard in musical form. With a sound palette based around an old 1970’s Lowrey organ, flutes, violin, vintage tape echo and a Premiere vibraphone, it captures a dreamy side of Yarmouth. Sun- drenched childhood memories, long shadows on the sand, the sound of seagulls and waves breaking on the shore. The magic of the fair - the entrance guarded by a huge mechanical giant, club in hand, while the roller coaster rattles overhead on a backboard of painted mountains peaks. As the sun goes down, noise drifts out from the amusement arcades, and neon flickers on Marine Parade, lighting up the fountains in candy floss colours.

“As I stepped off the train, the weight of time passed hit me. I was overwhelmed by a sense of sadness and loss. As I walked along the streets, looking for Trudy’s, I didn’t expect her, but I did find the house. Slowly, as I recognised buildings, streets, memories. I began to smile. I hadn’t lost anything. Great Yarmouth had changed. So had I. But the warmth of those sunny childhood summers was still there.” David Boulter 2020

Barry says: There is nothing in this world that would make me miss a Clay Pipe release, and this one was CLOSE. One of the best labels around, i'm absolutely sure this will be amazing. Get in while you can!