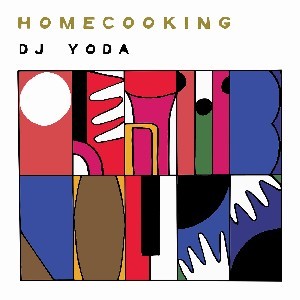 A soul and jazz spreading of wings, with the help of scene headliners Nubya Garcia, Theon Cross and Henry Wu. ‘Home Cooking’ is the new, mature sound of DJ Yoda. Maximising the experience and enjoyment gained from recording live instruments and prioritising songs over beats for his previous two albums ‘Breakfast of Champions’ and ‘Chop Suey’, this is a big step for the cut-and-paster as a producer, having wowed the world over for over two decades with his celebrated turntable tomfoolery. Recorded between his own studio and the world famous Abbey Road, ‘Home Cooking’ keeps one foot in the hip-hop old school with collaborations with the returning Jungle Brothers (the party-starting ‘Afrika’) and Boston bastion Edo. G (a peaceful route from London to ‘Roxbury’), and spreads to a melodic vibe scoring chilled Sunday mornings.

“I titled this one ‘Home Cooking’ because the music is so close to my heart, in terms of what I grew up on, and what really speaks to me on a personal level”. Imbued with the spirit of Guru’s ‘Jazzmatazz’, the output of Acid Jazz and 90s vitals from the Jungle Brothers, A Tribe Called Quest and De La Soul, Yoda admits that it's a happy accident that, whilst drawing on jazzy, soulful hip-hop from 25 years ago, the sound of ‘Home Cooking’ is very much of-the-moment. With British jazz currently in the rudest of health, vigorously championed by Gilles Peterson and with the likes of Sons of Kemet receiving Mercury Prize recognition to show such an upsurge has not gone unnoticed, Yoda lines up some of the best musicians the scene has to offer.

Sons of Kemet member and tuba sharp shooter Theon Cross, fast-rising saxophonist and boundary breaker Nubya Garcia, and award-winning jazz alchemist Henry Wu on keys, put ‘Home Cooking’ in the safest, most nimble of hands. “I feel so lucky to have been able to work with musicians of this calibre”. Add in the vocals of Brit-soul legend and MBE Omar, BBC Introducing star/“the UK's answer to Frank Ocean" Joel Culpepper, (‘London Fields’, played as a live six-piece session for BBC Radio London) and big gun for hire Eva Lazarus (a prominent feature on Swindle’s ‘No More Normal’, an album that runs parallel to ‘Home Cooking’), and the timing of Yoda’s sound expansion, plotted across London and beyond, has been impeccable. “It’s just lucky that right now is such a great moment for UK jazz, and that coinciding with me making this album - it certainly wasn’t by design. I didn’t set out to necessarily make something with such a strong jazz and soul influence, but at one point I took a step back and listened to everything I’d made, and it had accidentally, or subconsciously, turned out like that”.