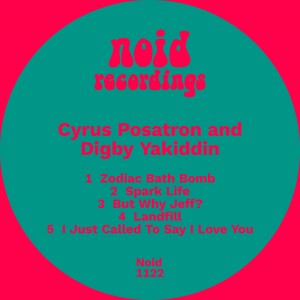 Who are those ridiculous names I hear you ask? A few clues in the label name and quick listen to the record and it can only be the eccentric crazed genius of Dan Tyler and Conrad McDonnell - aka The Idjut Boys - of course!!

After resurrecting their Droid imprint earlier in the year (to much acclaim), the north east boys are back with their infamous Noid label - the one dedicated to the art of the wigged-out n voodoo night club edit. Focusing largely on forgotten moments of sherm-disco, acid-rock and hallucinatory-boogie; the pair's unique label has become somewhat of a cult staple amongst old Electric Chair heads, readers of DJ History, members of World Of Echoes and yer standard dancefloor misfit that should know better.

Famed for spring-reverberated wobble, endless tape delays and seriously wonky source material, there really isn't any edits out there quite like the Noid edits. Eric Duncan's (highly coveted) COMBI are the closest things out there for comparison, but then that series didn't last anywhere near as long as this one! (Sorry Eric!).

Anyway, back on the 'floor and sounding more trippy than ever, "Zodiac Bath Bomb" finds our boys firing on all cylinders and losing none of their swagger as they mature into middle age (again, sorry lads!). Not only is their music great, inventive, playful and pretty much out there on its own - the lads are seriously two of the nicest and politest men I've ever had the pleasure of meeting in the 'biz (FACTOID - I once had to seek emergency medical assistance for Conrad's partner who was having a serious allergic reaction / food poisoning episode in Croatia; possibly my most heroic moment of my life so far!).

Matt says: It's the return of Noid! - The Idjut Boys infamous edit series and responsible for more than its fair share of dancefloor wobbles. Much like Ron Hardy and Danny K, you instantly know when it's the Idjuts behind the dials on the re-edit tip. Five numbers here tackling varying degrees of inebriation, energy and fun.

KH (Kieran Hebden)Looking At Your Pager / Only Human