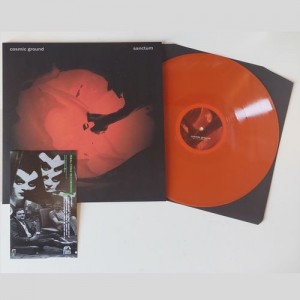 3 real deep, minimalist cuts from the project’s formative period- heavy Berlin School dark, sequenced electronica which ticks all boxes for Krautrock, T.Dream / Klaus Schulze heads, with nods to Conrad Schnitzler, some Ashra and other heroes from that time…

Opening piece “xx10” is incredible. Epic in depth and intensity, a brooding masterpiece of deep electronic psych to these ears, and a track that incredibly lay by the curbside unused, as Dirk began assembling his first CG record, “xx10 was only ever -and still is- it’s working title, and it lay unmixed for a long time until in 2018 I finally made a good mix”. Side one closer “Frost” was recorded in 2013 and was previously lost on Dirk’s hard drive until found fairly recently and added to his “Relics” series on bandcamp.

Side two is fully taken up with the epic “Sanctum”; and was the first recorded Cosmic Ground piece ever; prior to this new project even having a name. A long lost, discarded piece, recently found again and released on vinyl here for a first time. Cavernous synth swells give way to deeply beautiful heavily sequenced electronics, interspersed with percussive bursts and intense horror soundtrack-esque fills and thrills!

Just magnificent and released on orange wax in an edition of 250 w/insert.

Barry says: It feels fitting that my first intoduction to Cosmic Ground was on Polytechnic Youth sister-label Deep Distance and this latest should come through Dom's wonderful new Feral Child imprint. Cosmic ground craft a spiritual, evolving web of woozy synths and psychedelic ambience, and it looks as good as it sounds. Any synth music fans should always grab a PY / DD / FC press on sight.