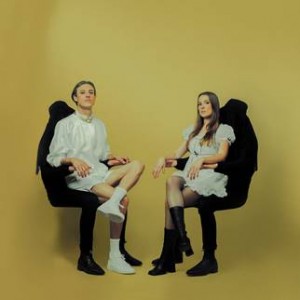 From Melbourne by way of Brisbane, Confidence Man are unarguably one of the hottest acts on the planet right now. A portable party that’s levelled dance floors and flattened festival crowds as it’s rolled out across the world, they are a machine custom designed to make you dance and lose your cool.

Without doubt set to be this summer’s most joyously exciting new band, they have to be seen to be believed – upfront there’s a statuesque chap clad only in a pair of nothing-to-the-imagination hot pants next to a woman in a custom designed baby-doll dress and shorts combo while behind them lurk two shadowy mute figures on drums and keyboards, each stripped to the waist and veiled secretively in what look like a satanic beekeeper’s hats made of a material so black, the light seems to fall into it.

If Janet Planet, Sugar Bones, Clarence McGuffie and Reggie Goodchild weren’t a band already you’d be snapping at their heels demanding they form one quick-sharp. Fact is, they are, and on Friday 13th April 2018 they release Confident Music For Confident People, their 11-track debut album for Heavenly Recordings.

The band have already offered a glimpse of what’s in store on Confident Music For Confident People – recent tracks Boyfriend, Bubblegum and Better Sit Down Boy were big and brash and bright as hell, like Dee-Lite tooled up and ready for our berserk modern times.

Confident Music for Confident People sets eleven tales of 21st century ennui to irresistible, irrepressible dance music. The opening lines of Try Your Luck (“I must confess/I’ve been sleeping with your ex/’Cos I heard he was the best/I must confess/I never would have guessed he would get so obsessed… I’m not surprised”) set the tone perfectly for what follows.

Here is a set of songs that take the kind of all-consuming interior monologues that bored, disaffected youth are wrestling with the world over and places them square in the middle of the dance floor before adding call-and-response choruses for good measure – it’s the best collection of perfect pop music you’ll hear all year, the perfect embodiment of the characters that made it that somehow manages to be both wildly ambitious and deceptively simple at the same time.

Barry says: 'Don't You Know I'm In A Band' perfectly encapsulates the whole vibe behind Confidence Men, brash, bold and more than a little conceited, they take the stereotypical entitled hilarity of stardom and turn it into a bitingly ironic, brilliantly accomplished synth journey. It's ridiculous, but it's totally brilliant. Heavenly have gone out of their comfort zone on this one, and absolutely smashed it.

Try Your Luck
Don't You Know I'm In A Band
Boyfriend
C.O.O.L Party
Out The Window
Catch My Breath
Bubblegum
Better Sit Down Boy
Sailboat Vacation
All The Way
Fascination