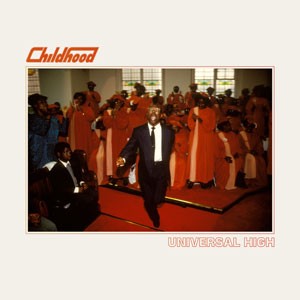 Recorded at Maze Studios, Atlanta across the summer of 2016 where the band decamped for a month, it was produced by the legendary Ben H Allen III (Gnarls Barkley, Animal Collective, Deerhunter) who struck up quite the creative partnership with ringleader Ben Romans-Hopscraft. You could be forgiven for branding ‘Universal High’ a rebirth.

In places almost unrecognizable from the dub-charged psychedelic indie of their debut, the new sound swells from the southern streets in which it came to life, caked in the Seventies soul of The Isley Brothers, Curtis Mayfield and Shuggie Otis.

Ben Romans-Hopcraft says, “’Universal High’ represents many things to us as a band. It signifies change, both musically and mentally whilst also revisiting influences that confounded our interest in music in the first place. What I think is noticeable is the direct nature of the songs and its influences. Being surrounded by soul music, classic pop songs and music with any form of groove all my life, these influences began to speak for themselves within these new songs we were writing”.

Since the first album Bens evolved into something of an auteur, with numerous collaborations under his belt as both a producer, recurrently alongside new regular comrade Sean Lennon, as well as numerous teamings with Fat White Family’s Saul Aamczeski as part of both Warmduscher and Insecure Men.

Barry says: Brilliantly effervescent pop songs, imbued with soul and flecks of funk. It's a smooth ride throughout, but brilliantly listenable and most importantly, thoroughly enjoyable.