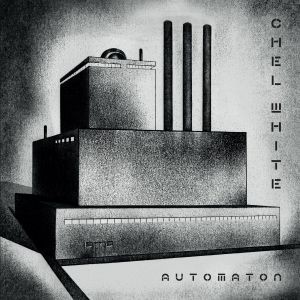 The music of Chel White is celebrated in "Automaton", a collection of mostly unreleased recordings from 1985 to 1991, by this innovative animator, film maker and visual artist.
Having studied music theory in grade school, White taught himself drumming and played in a new wave band until, in 1981, together with Dan Gediman, they formed the minimal wave duo "Process Blue" (Alternative Funk, 1985 / Dark Entries, 2018). Here their experimentation went way beyond playing drums.
His interest in industrial music, fostered in the late '70s and early '80s while working in factories as a way to put himself through college, informed his use of electronic instruments, tape manipulation, noise and unconventional percussion.
By 1985, as a now solo artist buoyed by newly affordable audio sampling technology, White tapped into his earlier teenage fascination with the art and films of both the Surrealist and Dada movements - in particular their disparate and fragmented imagery and sound - as a means to create striking new sonic palettes.
"Science & Industry" - a track largely influenced by Balinese monkey chanting and the consumer excess of American in the 1980's - is a clear example of "music collage". "Photocopy Cha Cha", made for the short animation film Choreography for Copy Machine (Berlin International Film Festival, 1992 / Sundance Film Festival, 2001) moved his music into the realm of early multi-media.
Experimenting further, tracks like "Liquid Shadows" and "Pensive" provide minimalist moments, before the drone-like "Dream #630" and "Forest Song" point to a future that included music video works (David Lynch/Thom Yorke).