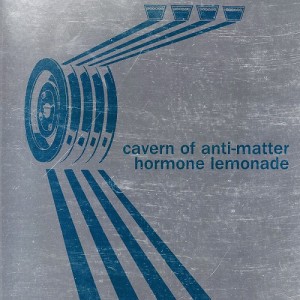 Cavern Of Anti-Matter return for their third studio album on their own Duophonic label. Hormone Lemonade sees the band heavily utilising the sounds of modular synths and home built drum machines, yet still keeping the loose, improvised sound familiar to fans of their first two albums, with minimal guitar melodies and live drum kit helping to build hypnotic layers of texture.

The albums genesis was in the self-constructed rhythm machines of band member Holger Zapf, the Taktron Z3 and Taktron Z2, being recorded to tape during three one-hour sessions. These sessions also included the use of 70s Hohner and Eko drum machines. Holger played his parts in a free-form way and the bpm varied wildly as it was not possible to sync it to any outside controllers.

Tim Gane edited these initial jams into useable chunks and proceeded to overdub each new rhythmic “chunk” with some basic musical ideas, keeping in tune to the hum of the machines and retaining the “feel” of the inherent pulse. Joe Dilworth arrived to lay down a beat over these minimal backing tracks, going with the flow as best he could.

In the following months the music was fleshed out using various synths and sequencers from Roland, Arp, Oberheim and Holger’s modular synth set up. As well as many of the bass and sequencer parts the modular also supplied the chords by tuning each one of it’s five oscillators to specific notes and intervals.