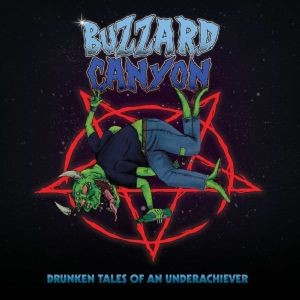 Hailing from Connecticut, Buzzard Canyon begantheir journey as a band in 2013. The inspirationwas simple: “To play some in your face rock ‘n’ rolland most of all, have fun while doing it!”

The term ‘Camaro Rock’ was quickly adopted andsums up their style just perfectly: picture yourselfwith a jeans jacket and mullet, driving an early 80’sCamaro, pumping your fist as you roar down adesert road with the radio at full volume.

The band have been amassing a loyal following bydelivering massive riffs and gigging tirelessly.Buzzard Canyon have performed on notablestoner and doom fests throughout the US andCanada and played many support slots for multiplenational acts.

October 2016 saw the band’s critically acclaimeddebut release, ‘Hellfire & Whiskey’. After spendingthe next few years performing live in support of therelease, the band started to write and demo newmaterial, and ‘Drunken Tales Of An Underachiever’is the result.