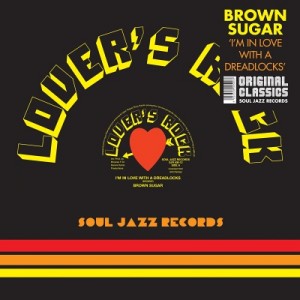 A stone-cold classic conscious Lovers Rock tune from the seminal British reggae group Brown Sugar. ‘I’m In Love With A Dreadlocks’ was originally released in 1977, and is now pressed loud for the first ever time on this new one-off press edition 12” on Soul Jazz Records.

Brown Sugar formed in London in 1976, made up of teenagers Pauline Catlin, Caron Wheeler and Carol Simms. After Brown Sugar, Caron Wheeler became known worldwide as the vocalist in Soul II Soul. Carol Simms launched a successful solo career under the name Kofi.

I’m In Love With A Dreadlocks’ was originally released on the Lovers Rock label, a fledgling reggae label formed by Dennis Bovell, John Kpiaye and producer Dennis Harris.

Brown Sugar were unique - not only were they one of the most important of the first wave of lovers rock groups, they were the only group who managed to successfully blend together a reggae roots consciousness with a lovers rock sensibility.

Matt says: One of two loud-cut Soul Jazz reggae twelves this week. The lover's rock classic by Brown Sugar has become of the most enduring tracks of this homegrown sub-genre. Complete with dub version there's simply no better pressing of this currently available!