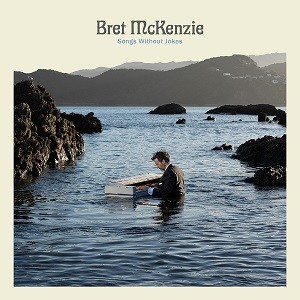 Solo debut by Bret McKenzie, one half of New Zealand’s most popular comedy folk duo, Flight of the Conchords.

‘Songs Without Jokes’ harkens back to the greats of the 1970s singer- songwriter era, with songs reminiscent of the finest work of Harry Nilsson, Randy Newman, and even a touch of Elvis Costello.

While he enjoyed and excelled at the work, he wondered where his songs might go if set free of all that plot-bound specificity. And so, while in Los Angeles a few years back, recording movie music with a crack assemblage of legendary session musicians, McKenzie started playing around with a tune or two he had written simply as songs - songs without any external direction, songs without plot-pushing concerns, songs without jokes.

The results reveal McKenzie’s talents on multiple instruments (he’s a veteran of several non-comedy bands in New Zealand back in the day, most notably the reggae-based fusion group The Black Seeds), and his affinity for wry, literate artists like Harry Nilsson, Steely Dan, Randy Newman and Dire Straits.

While the album may be free of traditional punch lines, it doesn’t lack a sense of humour. It showcases a new stage of McKenzie’s career, to be sure, but one that isn’t so far removed from his past work and true artistic self. Like Jim Henson before him, who made a career of blending the silly with the sincere and the playful with the profound, McKenzie also aims to connect rainbows to the ridiculous.

This World
If You Wanna Go
Dave’s Place
Here For You
That’s L.A
Up In Smoke
Carry On
A Little Tune
America Goodbye
Tomorrow Today
Crazy Times