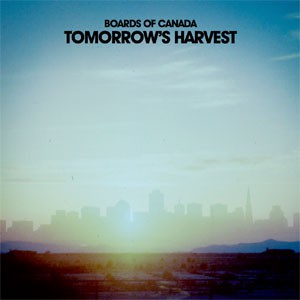 Boards Of Canada, one of the most respected and influential electronic artists of recent times, return with their first album in eight years. What with pre-release puzzles, desert parties, mysterious videos, and limited Record Store Day offerings, the hype surrounding 'Tomorrow's Harvest' has been building to a fever pitch. You'll be pleased to know that the album holds up against this weight of expectation, delivering another seductively widescreen, sci-fi cinematic selection of electronica tracks that could only come from the studios of Sandison and Eoin.

With accompanying sleeve / inner sleeve artwork featuring blurry images of secret American landscapes of atom bomb tests, peyote trips, religious sects and Area 51, the album opens with a short electronica piece that references the pair's fondness for the BBC Radiophonic workshop, or perhaps the incidental music from early 70s sci-fi films like The Andromeda Strain. Spidery arpeggiated synths and abstract choral washes lift tracks like 'Reach For The Dead' and 'White Cyclosa', which recall the horror movies of John Carpenter and Dario Argento. The woozy detuned analogue keyboards that became BOC's trademark arrive on the stumbling, stuttering 'Jacquard Causeway', while the beat-driven lushness of 'Cold Earth' could be seen as being a classic of the braindance era.

This eerie and unsettling first half makes way for a more uplifting 'part 2', with tracks like 'Palace Posy' and especially 'Nothing Is Real' providing warm synths, while titles like 'New Seeds' suggest rebirth and hope in this lifeless landscape. Perhaps the soundtrack to a film that only exists on Boards Of Canada's minds, 'Tomorrow's Harvest' is an intense and rewarding listen.