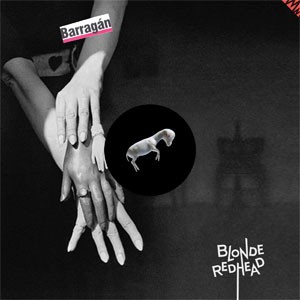 After a trio of releases as potent as 'Misery Is A Butterfly', '23' and 'Penny Sparkle', it shouldn't come as a surprise that the new Blonde Redhead album, 'Barragán', sounds so confident.

There is continuity in the presence of producer/mixer/engineer Drew Brown, who was a key member of the team during the making of 'Penny Sparkle', and who made a number of telling suggestions along the way this time around. It was Drew who persuaded the band to head out to Key Club Recording in Benton Harbour, Michigan, where they encountered an amazing trove of vintage synthesisers – it was, in Kazu's words, "analogue heaven."

When Blonde Redhead formed back in 1993 – initially a quartet, but, from 1995 onwards, the indivisible trio of Italian / Canadian twin brothers Amedeo and Simone Pace and Japanese sometime art student Kazu Makino – their music was obscured by their associations with post-No Wave art noise. The name was taken from a song by Arto Lindsay's short-lived band DNA and back then, these references suggested a band just out of step with fashion, doomed innocents stumbling into an inhospitable post-grunge landscape.

But they're still here. And after 21 years it's suddenly obvious that Blonde Redhead have never made records for fame, or for money, or to ape their teenage heroes, or to indulge any of the dumb, ephemeral impulses that clog up the blogosphere with dumb, ephemeral music. They're making music, simply, because they have to.

From the opening title track of 'Barragán', where acoustic guitars sway lazily alongside the flute-like tones of a Chamberlin synthesizer, it’s obvious that these songs breathe. The melodies occasionally flirt with folk music; outdoor sounds, including a suite of field recordings that Drew made in London’s Kew Gardens, are woven gently into the mix; and there is the odd moment where the band lets down their guard and leave a charming imperfection in the finished article. “Maybe we should work on it a little bit more” murmurs Kazu, midway through the spare, slinky “Cat On Tin Roof.” Tracks like “Dripping,” “The One I Love,” and “Defeatist Anthem” have all the emotional punch of previous high water marks like “Elephant Woman” and “23” – they just feel slightly less calculated, more serendipitous. And “No More Honey” has as much soar and swagger as anything else in the Blonde Redhead catalogue.

Darryl says: With subtle and brooding guitars and occasional hazy electronics, Blonde Redhead return as classy as ever.