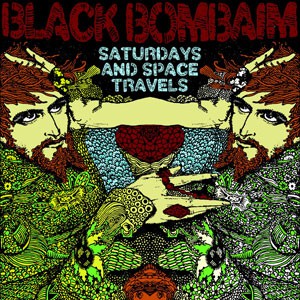 "Black Bombaim is the most notable band to come out of Portugal to grace the stoner rock scene.

Barcelos, the small Portuguese market town, where the trio of Ricardo (guitar), Senra (drums) and Tojo (bass) homed their craft, is more widely recognized for its famous pottery and the Barcelos Cockerel than it is for its blistering heavy heathen onslaught.

‘Saturdays and Space Travels’ the bands first full length, vinyl only double sided LP release, clocks in at 39 minutes and 24 seconds however, instead of being comprised as individual tracks, the release is instead made up of two separate instrumental, hard-hitting blistering licks, that have been locked in a cage of ear-shattering feedback.

‘Side A’, at 19 minutes and 47 seconds (as is ‘Side B’) sees the trio unleash their complex sound upon the listener. Beginning with a hazy, wall of sound, made famous by 60’s space-rock icons Hawkwind, the track gradually builds into a trance-inducing, repetitive and sluggish metal ascendancy, with the occasional trip into space.

While ‘Side B’ continues to be more of the same, due to the length of both individual tracks it may be advised to be listened to in broken down segments rather than in one fail swoop.

That said, the blend of sluggish metal and hazy space-rock works well and with this release Black Bombaim have set down the marker for fellow Portuguese stoner rock band to beat." (ChybuccaSounds.com)