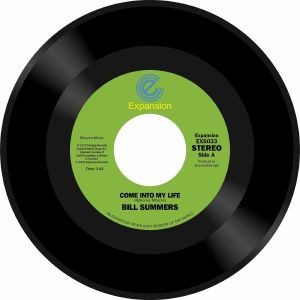 This is a reissue of the first Bill Summers single, “Come Into My Life”. The song is taken from his debut album “Feel The Heat” in 1977 from which Quincy Jones states in the liner note “Bill Summers is a major talent whose time has come”. They met through Herbie Hancock, Bill playing with Headhunters prior to working with Quincy playing drums and percussion on the TV series “Roots”. “Come Into My Life” features singer Deborah Thomas the same year she recorded the “Sweet Lucy” vocals for Raul De Souza and sang on the “Reach For It” album with George Duke. The song was written by drummer on the record, Alphonse Mouzon, and features Ray Obiedo guitar, Paul Jackson bass, a horn section featuring Roger Glenn with both Mark Soskin and the track’s producer Skip Scarborough on keyboards. The single is coupled with “Don’t Fade Away” from the second album “Cayenne”, the first which features Bill’s group Summer’s Heat. The song features Leo Miller on lead vocals and introduces Rodney Franklin on keyboards among the Bay area musicians who play. It is produced by Ndugu would later become drummer with The Crusaders. Bill recorded four albums for the Prestige label between 1977 and 1979. They all feature an all star 'who's who' line up of guests musicians, many just starting out ahead of their own hits and careers still thriving today. Others were already at the forefront of the music scene. The albums come from a unique moment in time and Bill hopes the interest in this single will prompt the label owners, Concord, to reintroduce all his works from that period, particularly online where only his dance hit “Straight To The Bank” features on a compilation. Bill is still an active musician and educator. There is a new Headhunters album coming on which he plays, and is working on a new album “Past & Present” with older songs revisited and new compositions included too. The music and playing of Bill Summers is beyond jazz funk and soul, it’s timeless and appeals beyond genres. “Come Into My Life” Sampled by: Motion Man, Graphidi Logik, The Last Trip To Gandahar.