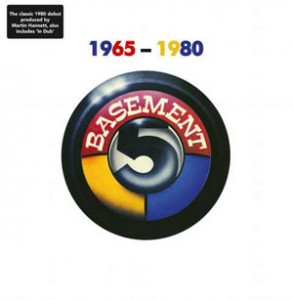 The long forgotten yet seminal work of Basement 5 on CD for the first time in years. The CD includes both ‘1965 - 1980’ and ‘In Dub’, with rare and unseen images and quotes. The albums were produced by sonic alchemist Martin Hannett. ‘In Dub’ is the companion piece to the classic ‘1965 - 1980’.

Partly formed out of the Art Department of London's Island Records HQ in 1978, Basement 5 were an innovative and highly original black post punk group who created a kind of politically charged, futurist dub. Their lyrics were an attempt to reflect the situation of young people in Britain in the era of Thatcherism, high unemployment, strikes, racism and working class poverty. The seething resentment, dub noise and sheet metal riffage was welded into a mighty sound by Hannett that stands the test of time.

In an unparalleled age of crate digging and reissue programs, Basement 5 is one of the few remaining great untold stories of its time. CD out of print for 20 years.

“You have to play it very loud to enjoy it fully. It was the most difficult production, I must say, the heaviest. It was eighteen degrees in the shade, the end of August. As I recall it has been the most physical album that I’ve ever done. Made me feel like I’d been carrying bricks around. Heavy work. Putting the bass lines in the right place. But it was good.” - Martin Hannett, 1981