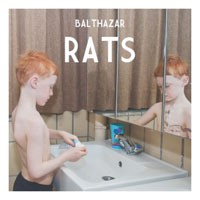 Balthazar are the brainchild of songwriters Maarten Devoldere and Jinte Deprez. Meeting as teenage buskers, the two embarked on a whirlwind writing partnership that led to the quick formation of the band and initial acclaim in mainland Europe. Resisting the temptation to cash in on that wave of interest, Balthazar took the best part of five years to record their debut album, experimenting with different genres and approaches until they were sure that they had the sound they were looking for.

With ‘Rats’, that sound has been honed to a focus on melody and subtlety, avoiding the current fashion for bombast to create songs that burst forth in horns or sweep by on strings, underpinned with delicate rhythms that draw on both the pair’s love of the work of Serge Gainsbourg and Leonard Cohen and the hip hop production of the likes of Dangermouse.