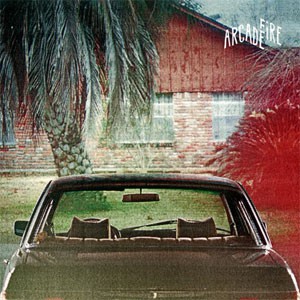 Having released two of the most inventive and musically extravagant records of the noughties - "Funeral" and "Neon Bible" - Canadian ensemble Arcade Fire create a concept and sound that represents their personal upbringing (in the suburbs) for their third outing "The Suburbs". Frontman Win Butler's vocal lines are smoother than before and are given weight by a looming sense of darkness, while co-vocalist Regine gives balance to Arcade Fire's music with an added feeling of wonder running through her work. As with their earlier material, violins, harpsichords and xylophones, among other instruments, accompany guitars and drums to add depth to a superb indie rock sound.

Andy says: A less euphoric, less quirky record, but I think that was definitely required. They still rock but there's more control. As ever, this just overflows with melody, and song for song I'd say this is a much better album than "Neon Bible". They're as poetic and emotive as Bruce at his best, but with a load of really smart post-punk/ alt rock influences instead of classic rock'n'roll ones. A proper, beautiful band. A splendid LP. You're gonna love it.