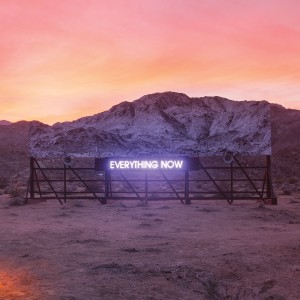 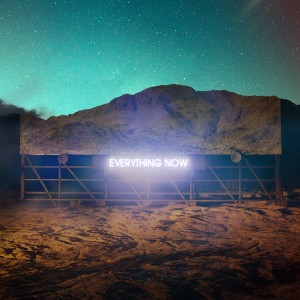 Arcade Fire return for their latest album since 2013's 'Reflektor', Quickly following the snap-release of their 'Everything Now' 12" released last month, 'Everything Now' (the album) bursts into the limelight. 'Everything_Now (continued)' precedes 'Everything Now' (i'm sensing a theme here), both of them working together to ease you back into the orchestral, epic ways Arcade Fire have long been known for. As soon as we kick in to the titular piece proper, we get longing but upbeat piano blazing a path melodically for Butler's unmistakeable vocal affectations, before introducing swarming strings and frantic pizzicato bass. It's not surprising that the piece ebbs and flows through minimalistic orchestral lulls to euphoric, instrumentally dense passages with ease, that being the Fire's Raison d'être, and it is achieved without any trouble here.

'Signs Of Life' walks a little more towards the disco dancefloor end of the spectrum, with old-school hip-hop affectations segueing easily into stabbing horns and rolling, grooving bass guitar. It's another sign of a well-heeled group of composers that they can flit between their oft-repeated (but unmistakeable) trademark sound and something a little more off-piste.

Move On a little bit, and 'Chemistry' is a blazing walk across a tropical Caribbean beach, with throbbing tropical percussion ducking the rest of the instrumentation, lending a noticeable compressor thump. Saturated, balmy swarms of reverb lurching into distorted guitar and multi-part vocal harmonisation for the call-response chorus.

While the duo of 'Infinite Content' and 'Infinite_content' seem identical (try telling that to a C++ programmer), they actually represent different sides of the same coin, with the blazing post-punk distorted power chords of the former being re-interpreted by the same band but on a beach, mojito in hand, and sun blazing down for the underscored iteration.

As we roll into the latter half of the album, 'Electric Blue' cuts an impressive shape with it's neon synths and treble-heavy falsetto putting things firmly into 70's disco territory, while the pulsing motorik rhythms and gothic sulk of 'Put Your Money On Me' and the stunningly evocative atmospheric longing of 'We Don't Deserve Love' are bookended with a closing version of 'Everything Now (continued)' but this time, minus the underscore. Details are everything (now).