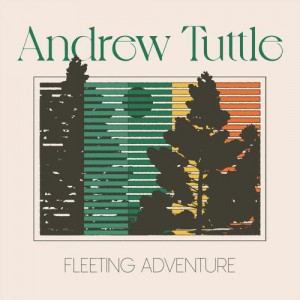 A deepening sense of life, love, health, loss, and luck shaped the outlines of Tuttle’s fifth, and most collaborative album to date. Following a surprising exhilaration and exhaustion from the hitherto most innocuous of moments in mid-2020 - a half-hour drive to collect an online order, the furthest distance he’d traveled in months; Tuttle commenced working on new musical ideas loosely based around navigating the aftermaths and interregnums of a restless era. “I was thinking about what’s going on in the world and how localised it has become for so many of my friends in different places,” Tuttle explains. “Not in a negative way but more so focusing on how lovely it is when things are good.”

Thinking of musician friends and peers around the world – each confined to their own immediate surroundings – Tuttle’s generative and collaborative musical practice became a silvery through-line, connecting American innovators Steve Gunn, Chuck Johnson, Luke Schneider and Michael A. Muller (Balmorhea), to French/Swedish violinist Aurelie Ferriere and Spanish guitarist Conrado Isasa, back to Australian friends such as Voltfruit (aka Flora Wong and Luke Cuerel) and Darren Cross (Gerling) – among many others – each fitting seamlessly into Tuttle’s vibrant musical world.

Whilst previously a feature of Tuttle’s music, the exploration of space and texture found within Fleeting Adventure feels particularly vast and generous. The involvement of Chuck Johnson and Lawrence English mixing and mastering the album respectively, as with their work on Tuttle’s previous and breakthrough album Alexandra (Room40, 2020), inspired Andrew to develop songs that are as serene and patient as he’s ever sounded. Stripping elements back, the idea of pulling the songs apart somewhat, was just as important as adding the work of Andrew’s collaborators. “It is spacious through intent, process and assistance,” he confirms. "I thought carefully about what instruments - both what I played and what I asked others to provide based on my unadorned banjo track - would best work with what I was wanting to create.”

The road to Fleeting Adventure has been both long and short, but it sits as a tender and perhaps even vital reflection of an era in progress, in retrospect and in anticipation. A poignant contemplation on the many bonds that make up our lives from friends and family to the myriad places we inhabit and pass through along the way. The idea that an adventure doesn’t necessarily have to be a grand statement Andrew Tuttle has gathered up a number of his contemporaries and crafted something quietly spectacular, a new beginning to familiar habits.

Side A
1. Overnight's A Weekend
2. Next Week, Pending
3. Correlation
4. Freeway Fle
Side B
5. New Breakfast Habit
6. Filtering
7. There's Always A Crow