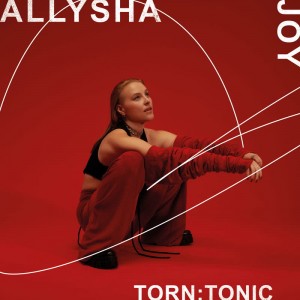 Delivered unfiltered, straight from the soul, ´Torn : Tonic' pulls us into a 10 track journey that weaves through the multiplicity of letting go, standing tall, and creating space all at once. The album's expansive and vivid exploration of healing examines the power that comes with accepting the complexity of change. Allysha walks listeners through the remedy she finds in sound and emerges empowered to share this healing with others. Deeply moving and lyrically compelling, 'Torn : Tonic' hosts a stellar line-up of artists, creating a world of collective power, growth, and hope.

Allysha Joy is an integral member of the vibrant Melbourne soul & jazz scene, well known for both her solo work and as lead vocalist for 30/70. A uniquely-talented soul, her husky voice, and formidable Fender Rhodes prowess have garnered attentive audiences around the world.

Her 2018 debut album 'Acadie : Raw' was named 'Best Soul Album' at the Music Victoria Awards, featured in Bandcamp's 'Top Soul Albums' of the year and received a nomination for 'Best Jazz Album' at the Worldwide Awards. An incredibly prolific artist, Allysha has released on labels; Rhythm Section, Gondwana, Future Classic, Total Refreshment Centre and now another drop for First Word, after her acclaimed 2020 EP, 'Light It Again'.

Allysha's production on 'Torn : Tonic' effortlessly arches across a sonic palette, comprised of shuffling broken grooves and exquisite celestial melodies. There are healthy swathes of skippy neo-soul boom bap sensibilities, entwined with stark swing-laden electronic percussion, Detroit-esque sun-saturated synths, and Antipodean bruk backbeats. And whilst this project was produced entirely by Joy herself, she is far from alone, inviting in an array of female and non-binary artists to bless assorted tracks with their own unique gifts. Ego Ella May, BINA, Rara Zulu, Belle Bangard and Dancing Water all appear, expanding upon the formulaic roles of featured artists to share the creative space as equal collaborators.

'Torn : Tonic' exudes vibes, from the opening whiplash snare of 'Peace, to the rolling jazz-bruk of lead single 'Let It!', to the sweet soulful sonics of 'Still Dreaming', to the closing triumphant shout of "All Joy!!" on 'G.N.D.', this is a 40-minute opus that will definitely require repeat listening.

Allysha's poetic introspection reveals the album's intention to demand space, purpose, and pleasure. Her words are deliberate and direct to the alarm bells and messages her artistic vision carries. Fluid, cross-genre, and spirited with generational stories embodied, 'Torn : Tonic' sits at the intersection of a feminist manifesto of Joy's momentous leap as an artist, and her exploration of what it means to be human in today's capitalist-driven world.

In Allysha's words, 'Torn : Tonic' is exactly as the name describes. "It is looking directly into the shadow of pain and overcoming it with joy. No love songs! Just social, political, emotional anthems for change! It is the first record I have produced entirely on my own and it feels like that perseverance that I have consistently had to conjure up is embedded in this music, overcoming my own conditioning in a society and industry that constantly tells me I can't, so I must!"