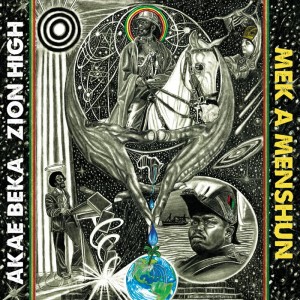 The stellar production trinity that is Zion I Kings have been involved collectively and individually in creating some of the most highly regarded contributions to the vast Akae Beka catalogue. The timeless songs of 'Mek A Menshun' amply reward the listener who can penetrate into the mystical musical realms of Rastafari. Longtime fans of Midnite and Akae Beka will note that Vaughn Benjamin's singing on 'Mek a Menshun' reached new heights of melodic delivery and emotional intensity. Coupled with his always poetic and insightful lyrics, these 10 original songs rank among his best recordings to date. The title track 'Mek A Menshun' includes vocals by Protoje Grammy (R)-nominated artist.

Mek A Menshun features the stellar musicianship of the ZIK distinguished in typical fashion by the rock-solid drumming of Lloyd "Junior" Richards. On this album, his playing is complemented by Aston Barrett Jr. ("By Day", "Only Now") and Kirk Bennett ( "Kagm Mystory", "Mek A Menshun"). The signature stylings of the other core ZIK musicians are augmented by horns (Andrew "Drew Keys" Stoch -trombone, Donald "Jahbless" Toney -saxophone), flute- Sheldon "Attiba" Bernard, kette- Andrew "Bassie" Campbell, and the guitar of Chet Samuel. ZIK guitarist Andrew "Moon" Bain contributes a string arrangement on "Only Now". Throughout the album, Laurent "Tippy I" Alfred's spot-on organ shuffle bubbles the rhythm forward. Many of the 'Mek A Menshun' tracks were among the last recordings done by the veteran engineer Gary Woung.