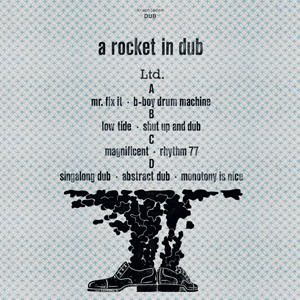 For some, melancholy is the joy of being sad. But for A Rocket In Dub, the reawakened project of Düsseldorf producer Stefan Schwander, also known under pseudonyms like Antonelli Electr. or Harmonious Thelonious, Viktor Hugo's famous saying always applies. Two years ago, the Düsseldorf producer and musician released a 4x 7" box set on Krachladen Dub, his first release after a break of 17 years at the time. Now, two years later, 9 new tracks follow as a longplayer on double vinyl. Even more experimental, more playful, more hypnotic and with a trombone! Monotony is nice! The rocket is back in the club, teaching genres like house and minimal Jamaican dub deepness once again. Recommended.