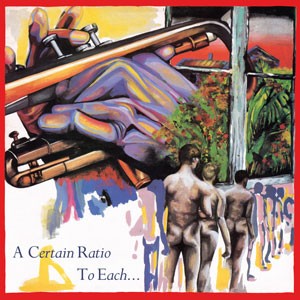 This first album was originally only released on cassette and was compiled from a collection of early four-track recordings and a set of live tracks recorded when the band was opening for the Talking Heads. The sound is good for lo-fi recordings, and the band is, for all of their musical amateurishness, precise and controlled. Those seeking an idiosyncratic, interesting art-funk band can do no wrong with this release.

“A Certain Ratio embraced the ethic and culture of the late seventies post-punk explosion, but sounded like nothing else around them and refused to fit in,” reads the press notes. “ACR always do what I don’t expect, who wouldn’t want to work with artists like that?” Mute Records boss Daniel Miller adds. Though various members have come and gone, a core line-up of Jeremy Kerr, Martin Moscrop and Donald Johnson has always remained.