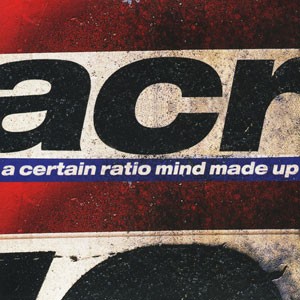 Produced by Ratio in Manchester between 2006 and 2009, "Mind Made Up" marks a stunning return to hard-edged funky form. 'The songs are timeless and true to ACR's roots,' says Donald Johnson. 'The emphasis was placed on keeping it simple in the studio. Trickery was kept to a minimum and we never took more than three takes on any track.' Adds Martin Moscrop: 'Most songs we jammed in rehearsal one week and recorded the next, so that they were rough round the edges. And the lyrics are some of the best Jez has ever produced. You'll also hear old ACR influences throughout the album. "Teri" was actually the first song ACR ever wrote, but it has never been recorded or released until now.'

A Certain RatioChange The Station