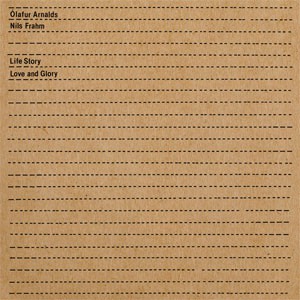 Erased Tapes artists and friends Ólafur Arnalds and Nils Frahm have separately carved out a musical career that defies genres both with their unique live shows and a loyal fan base that’s always eager to hear what their prolific output will bring.

Their latest collaborative 2-track release ‘Life Story Love and Glory’ is a live improv affair on two pianos, recorded in 2012 at Nils’s Durton Studio in Berlin. Fans may wonder why they have waited until 2015 to release these tracks, but having revealed a new website www.arnaldsfrahm.com you may think this may not be the end to their musical story this year.

“We would meet in Reykjavik or Berlin with the intention to share some days off work, hiking, swimming or eating pizza. That is great for a couple days, but after a while we would always end up back in the studio, fiddling with synths or pianos.” – Nils Frahm.

“You can hear in the beginning of ‘Life Story’ how I have already started playing the piano whilst Nils is still moving microphones around and preparing everything. It was all kept in!“ – Ólafur Arnalds.

‘Life Story Love and Glory’ will be released as a 7” on Erased Tapes – exclusively through record stores only on August 21, 2015 ahead of its digital release later on – as an ode to this classic and beloved format.