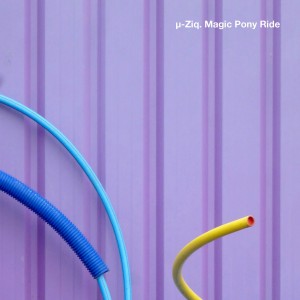 Planet Mu welcomes back owner Mike Paradinas (a.k.a. µ-Ziq) for ‘Magic Pony Ride’, an album of joyful, melodic, jungle-inspired music, and his first LP of new material on the label since 2013. The title reflects the childlike wonder of the album, happy melodies are foregrounded, wordless vocals bounce and echo while sounds bubble and sparkle. Paradinas had been releasing archival albums but got a taste for making new music after a trip to Wales (inspiring ‘Scurlage’, his 2021 album on Analogical Force). This influence of using trips away as a muse is carried on in ’Magic Pony Ride’ after a weekend getaway to found Paradinas riding Icelandic horses across a snowy landscape at dawn. You can almost feel the relaxed wide open spaces in the lush synth chords of the title track and ‘Uncle Daddy’.

The album also reflects on family with features from his daughter Elka on ‘Picksing’ and ‘Elka’s Song’ and ‘Galope’ in memory of his father who passed away a few years ago. The theme of family is also found in the meditative ‘Shulem’s Theme’, a title inspired by the Netflix series Shtisel. These reflective themes tie in with this year’s 25th anniversary reissue of µ-Ziq’s 1997 breakthrough album ‘Lunatic Harness’. In Mike’s own words “Magic Pony Ride was written as a kind of follow up to ‘Lunatic Harness’, at least in terms of genre and style. After mastering Lunatic for its reissue I went back to using breaks again on some newer tracks and this is the result!”