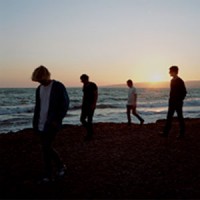 Following the death of drummer Jon Brookes last year, The Charlatans regrouped and set to work on their 12th album. As always, they’ve drawn on the past as well as the present to create their musical melting pot. “Talking In Tones” and “In The Tall Grass” have an early morning post-rave melancholy, there’s Mayfield-esque soul in “Keep Enough”, “Emilie” and “Come Home Baby” are pure pop, and “So Oh” with its sun dappled West Coast vibes is an absolute gem. The anthemic “Let The Good Times Be Never Ending” is prime Charlatans with wah-wah guitars and swirling Hammond keys over driving bass lines and skittering drums. And throughout it all, Tim’s vocals are sublime. Yes, there is melancholy here, but this is by no means a maudlin elegy to a lost friend, instead there’s love and real warmth. It’s an optimistic, forward looking album and their best in a decade.

Q have already described the album as “ one the finest of their career”, whilst the Guardian have called it “a triumph”

The album comes after a difficult year for the band following the death from brain cancer of their old friend and drummer Jon Brookes last year. Rogers says that they were determined to carry on to honour Brookes' memory.

Andy says: One of the best records of the year just got even better!

Bonus Tracks (Deluxe CD Only)
1. We Sleep On Borrowed Time
2. Walk With Me
3. As Long As You Stick By Me
4. I Will Never Leave You (Demo)