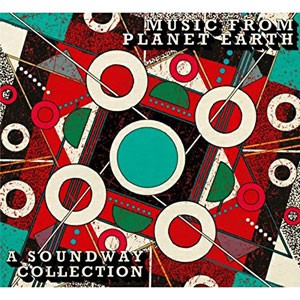 'Music from Planet Earth' is a compilation of music selected from some of Soundway Records' current roster of active artists. More than ever in 2014 the moniker 'world music' seems redundant. A term used to lump everything that isn't from a certain place or sung in a dominant language into one category that receives less attention from nearly all mainstream music media is an unhelpful one to say the least. Soundway Records aims to support new (and old) music that doesn't always fit into a convenient genre. That could be a band based in London formed of musicians from 6 countries making hybrid pop music sung in a Nigerian dialect. It could be music made in South Africa by five people of completely different age, race and background. It could be synth-funk sung in Spanish and English by a New York native of Cuban heritage. It could be made by an English producer who hooked up with purveyor of psychedelic cumbia from Bogota and put together a super-group of Colombian session players. Or an Angolan-born Portuguese producer based in Lisbon working with MCs, dancers and musicians from Nairobi, Luanda and Newcastle. A collective of Aucklanders with backgrounds as diverse as Nigeria, Trinidad and Sudan rocking crowds and making music in New Zealand. Surrealist Electronica with Arabic vocals from Brittany by way of Brooklyn or Spanish / Sri Lankan experimental sound textures forged late at night in Camden Town. Call it anything, we might not have the answers just please stop calling it 'world music'.