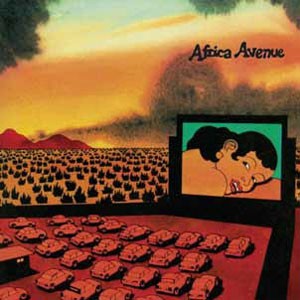 Much has changed for the members of The Paperhead since the release of their TiM debut back in 2011 - tours both domestically & abroad, more releases, college, life, work, love, tragedy. The span of time & growth (both personally & musically) are reflected in the ten tunes on the band’s third album “Africa Avenue”.

Recorded by the band themselves in bassist Peter Stringer-Hye’s Nasville garage & mixed by Cooper Crain (Cave, Bitchin’ Bajas), “Africa Avenue” finds its groove in its unabashed melodicism and pop hooks. The title of the album is an homage to a street the band hung out on as children, and the experiences & memories created there drift in & out of lyrics that are appealingly abstract, but hint at an unspoken narrative. The jaunty opener “Africa” sets the scene with guitarist Ryan Jennings’ acoustic strum & sly synth squiggles, before unloading a crunchy guitar hook unlike anything the band has done previously, letting listeners know that something new is happening here; a step towards a full & comfortable immersion in the sounds they love. The band makes no bones of it’s affection for Sixties & Seventies psychedelia, but “Africa Avenue” quietly tiptoes around easy comparisons, mutating itself into something more textured & intricate, leaning more towards avant-pop.

The rest of the album has it’s fair share of stunners like the cosmic country of “Mother May”, the folk-raga of “In A Corner, or the harpsichord-sprinkled majesty of “Old Fashioned Kind” all fight for ear-space in an album full of highlights. The true key to the album’s success lies in the band’s synergy that comes from playing together since they were teenagers; the “hive-mind” that enables each to anticipate & play off each other, achieving an effortless grace in their arrangements & performance. “Africa Avenue” feels more organic, sounding like the work of a cracking live band in action rather than a heady, studio construction. A breath of fresh air & without a doubt, the band’s most accomplished effort to date.