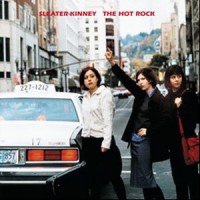 ‘The Hot Rock’ is the fourth studio album by Sleater-Kinney, originally released on February 23, 1999 by Kill Rock Stars.

It was produced by Roger Moutenot and recorded at Avast studio in Seattle, Washington in July 1998.

‘The Hot Rock’ reached number 181 on the U.S. Billboard 200 chart and number 12 on the Heatseekers Albums chart, becoming the first Sleater- Kinney album to enter the charts.

“Tucker explores what her voice can do when it's not in overdrive, stretching vowels like a religious supplicant or spewing prosody like Patti Smith. At the same time, Brownstein blossoms as a singer herself [...] braiding lines with Tucker so artfully the result sounds like the voicings of a single restless mind” - Will Hermes, Entertainment Weekly (Grade A).

Start Together
Hot Rock
The End Of You
Burn, Don't Freeze!
God Is A Number
Banned From The End Of The World
Don't Talk Like
Get Up
One Song For You
The Size Of Our Love
Living In Exile
Memorize Your Lines
A Quarter To Three