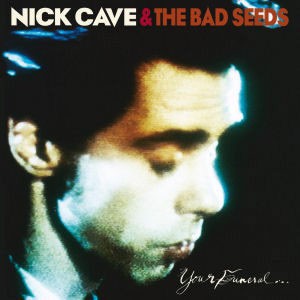 With ‘Your Funeral… My Trial’ The Bad Seeds expanded their personnel by adding Thomas Wydler on drums, enabling Mick Harvey to display his considerable multi-instrumental talents.

This was the band’s fourth studio album and was released on November 3rd 1986, and was originally released as a double EP, with production duties handled by Flood and Tony Cohen.

Cave later remarked "That particular record, which is my favourite of the records we've done, is very special to me and a lot of amazing things happened, musically, in the studio”.

“There are some songs on that record that as far as I'm concerned are just about perfect as we can get really- songs like ‘The Carny’, ‘Your Funeral, My Trial’, and ‘Stranger Than Kindness’, I think are really quite brilliant“.

Nick Cave and the Bad Seeds appeared in Wim Wenders’ 1987 movie ‘Der Himmel Uber Berlin’ (aka ‘Wings Of Desire’) performing ‘The Carny’ and ‘From Her to Eternity’.