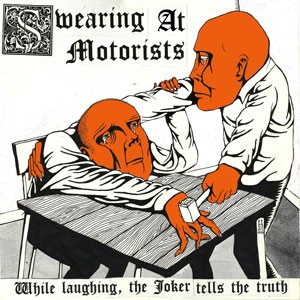 Like Iggy Pop’s great lost Nashville record or the legendary demos for the Strokes masterpiece that never was, this recording is full of catchy courage, significant low notes, bedroom rhythms, hooks, and so on, all of which make for an impossible amount of pleasure. This Swearing At effort towers heads and squirrels above whatever that was you were just listening to. -Camden Joy

Swearing At Motorists has come a long way since it's birth as a poster for a fake band in 1994 .The late '90s found S@M releasing a slew of 7" EPs on different labels, and after getting repeated plays from John Peel and favorable press worldwide, the band landed a contract with the then new label Secretly Canadian. They released 2 EPs & 4 LPs on SC, including 2000's Number Seven Uptown & 2002's This Flag Signals Goodbye, both of which were named MOJO Magazine's "Underground Album of the Year" the years they were released. Swearing At Motorists relocated to Berlin, Germany in 2005, releasing their last LP for Secretly Canadian, Last Night Becomes This Morning the following year before quietly disappearing into the never-ending Berlin night...

8 years later, the band has resurfaced in Hamburg, Germany, with a new album titled While Laughing, The Joker Tells The Truth, to be released on Anton Newcombe's label A Recordings Ltd. Co-produced by Dave and Rick McPhail (of the legendery German band Tocotronic), the album tells the tales of those "lost" 8 years in classic Motorists style.