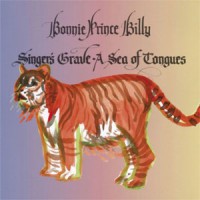 This very limited deluxe edition packages together the "Singer's Grave A Sea Of Tongues" album with an exclusive 8 track compilation of songs from his itunes only "Barely Regal" series.

Bonnie ‘Prince’ Billy’s new album ‘Singer’s Grave A Sea Of Tongues’ is released on Domino.  At the locus of five corners, mythos is in the wind; a sea of tongues boils forth, mountains spurting forth from the magma. Bonnie sings for who he was and will be and for all of us, in time.  Bonnie Billy has been quoted as saying that one of the songs on the album is a conceptual track that’s about “one day in 1973 when only two people died in the whole world.”