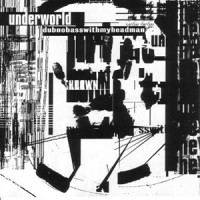 Two decades on from its release in 1994, this is one of the most influential British electronic records of all time. To celebrate its twentieth anniversary the album has been meticulously remastered at Abbey Road for a deluxe reissue by Underworld’s Rick Smith.

The 2LP Vinyl - pressed on 180gm - contains the original album, remastered by Rick Smith from the original MIDI.

Having seen their synth-rock band Freur grind to a halt in 1989, Karl Hyde and Rick Smith relocated to Romford, hooked up with DJ Darren Emerson and became the art-rock reinvented as techno outfit Underworld. Featuring Smith's stream of consciousness vocals (created by taking a pen an paper with him and “mapping out journeys across cities at night”) and Smith, Emerson and Hyde's immense electronica / techno cuts (equally inspired by early influences like Kraftwerk, Steve Reich, Hawkwind and  Tangerine Dream as the early 90s Romford rave scene) 'Dubnobasswithmyheadman' is a landmark 1990s techno album. With Emerson on hand to road test tracks in his DJ sets, the album has key dancefloor winners, but also works a home-listening full length LP.